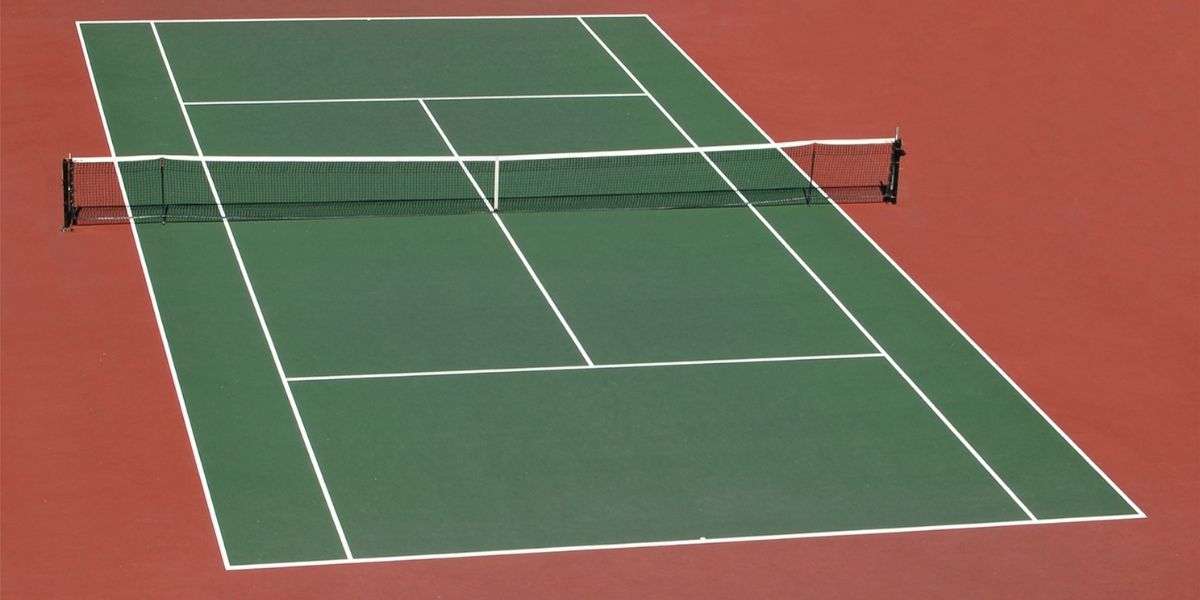 *Team Sports Mania is reader-supported. We may earn commissions if you buy through our links.

Getting started with anything new is pretty hard. But getting started with tennis is even more difficult because of its unusual rules and there is a lot to take even in the basics. That can pretty easily discourage a young player.

But although there are plenty of things to put into your mind, the experience and benefits of playing tennis are very rewarding. You can do it for fame or particularly not for any reason rather than spending time with your friend, but tennis can tremendously boost your stamina, heart rate, blood pressure, and your muscles.

Now you are going to be introduced to the tennis basics – mostly the terms related to court, gears, and different shots with a brief description of them.

Crushed shale, stone, or brick is used for making a clay tennis court. They are cheaper than any other type of court, but it has a longer maintenance time which can be expensive. Clay court is used mainly in the famous French Open. The shots go on slowly here and give the ball a high bounce in this court. Latin Americans and European players are more familiar with clay court and expected to play better on this court.

Hard-court is perfect for every type of game, be it fast or slow. Though the quantity and size of sand mixed in the paint coating may vary in the games. Hard-court maintains a level playing field for players. US open uses the acrylic hard court and the Australian Open uses a synthetic one. The acrylic court is more on the rigid side and the game is faster.
This kind of court is more available out there, but you may get hurt as these courts can be hard on the body.

Grass court was a very familiar thing in the past. It is not that common to the players of recent times. No one is that much into this type of court anymore as it needs constant watering and mowing. It will impact your game if the weather changes. The grass court has a low bounce capacity which makes it the fastest court of all.

The court is the place where all the actions take place. So it is very important to know the necessary basic tennis court terms to be more comfortable on the court and the feeling of understanding the court will certainly help you to be more confident.

It marks the boundary of the court on every side. It is where you will spend most of your time waiting for your opponents to play their shots.

The Singles’ sideline is drawn parallel and 9ft inside the doubles sideline. The players have to keep the ball well within the singles sideline if a single match is being played.

It is the line drawn with the full width of the court and used when a double match happens between two teams.

It is where the court is divided into two parts and the players as well. When you are playing volleys pretty close to the net, take into consideration that the net will be slightly lower into the center.

It is the line that divides the service boxes horizontally.

The ball has to land within the opponent’s service box which is the cross-way opposite a player’s service box. The player has to alternately serve into the right-hand and left-hand service box in the first and second serve of their game.

It marks both of the courts on both edges.

Doubles’ tramline is the extra space between the singles sideline and double sidelines.

As the coaches often instruct the players, it is necessary to position yourself beside the small baseline center mark for getting the maximum court coverage.

The serve is hitting just before the ball bounces. You must know how to serve to be a good tennis player. Without that, you cannot even score a point. The serve is played from behind the baseline and on the side of the court into the service box which is diagonal from the serving player.

The usual system of serving for a tennis player is that they throw their balls in the air to get the best angle possible and then hit it. There are no professional players who cannot serve, and I highly doubt if anyone can be called a professional tennis player without it. The ball will be called an ace if the opponent cannot hit it during the serve.

Forehand is the first kind of shot that you may need to learn. Forehand is done by swinging a tennis racquet across the body on the same side of which hand holds the racquet. Most of the players keep their tennis racquet in one hand for a forehand shot.
Some players like to do it with both hands. Different people prefer different styles to execute forehand. Western, eastern and continentals are the styles for forehand.

The backhand is the exact opposite of the forehand. You can do it by swinging the racket away from your body on the opposite side to the strong hand. Players use a hand for this shot, but if you prefer both hands for grip, then there will be no problem at all.

Volley is listed as the most aggressive shot of tennis. You need to perform a volley before the ball starts to bounce. Here, the idea is to give no time to the opposition for adjusting. Knowing how to serve and volley will make you a solid tennis player. There is another shot called half volley. It is pretty similar to the valley one. Just the ball is being hit on the rise after a bounce.

Overhead is the kind of shot that should be hit by a lob. Notice that if you are moving to the net, your opposition will probably hit a lob. Lob is a difficult shot to face correctly. The ball may end up being directly over your head.

If this happens when you are still at the side of the net, do an overhead at this time. It is a similar but modified version of the serve. Use continental grip for overhead.

It is a hard shot and mastering it is not a cup of tea for amateurs. This shot requires both skill and techniques. It is a highly recommended shot that needs to be learned mainly for two reasons. You can keep the ball out of reach for the opposition by learning to hit this shot. It will give you some time for adjusting your right position as well.

It is a tricky shot. It is done when the opponent is at the rear end of the court, or they have moved from their position. Hit the ball softly over the net to perform this shot and try to bounce it twice before the opposition can reach for the ball.

It is one of the most used shots in tennis. Perform groundstroke in response to your opponent’s volley.

Tennis gears are an essential part of the game as you won’t likely to perform well or even be able to participate in the tournament without them.

The tennis racquet is the most important piece of equipment for a tennis player. Do your research about different brands and sizes before buying it. See which one gives your hand a better grip. If you are wondering how to choose a tennis racquet, we made your life easier to choose the perfect tennis racquet by writing a complete buying guide on the best tennis racquets.

Many players do not like their racquet making vibration, so they use a dampener. It is made from a rubber material.

The tennis net is put in the middle of the court as an obstacle to the game. It separates the two players.

Ball machine helps to practice learning strokes. You can set the ball to deliver at topspin or backspin. It delivers balls at the exact time and helps you to practice all by yourself.

Tennis shoes should give you optimal support to the legs when playing. Keep it lightweight to move around quickly.

Sweatbands are usually worn around the forehead to help from drowning in the sweat. It is very useful for keeping you dry when playing.

Tennis apparel has to be among the best quality. Otherwise, it won’t be able to provide comfort. The clothes should be able to soak up your sweat and keep you relaxed.

Sun ages the skin and causes skin problems a lot. Apply sunscreen 15 minutes before you hit the court.

A ball cart is suitable for keeping the balls together while you are practicing.

If you want to start playing tennis but all the scattered information is just wasting your time rather than helping you learn it, this guide on tennis basics can give you a great heads up on the game. Keep practicing more, and with time you will notice a considerable change in your skills and stamina.

Our extensive guide on the best tennis balls covers everything you need to know to make a wise purchase, from practice balls for kids to extra duty pressurized balls for high altitude courts. With...

I know how difficult it is to find the best gift for tennis players because you have numerous options to choose from. That’s why I decided to do the legwork for you.

Hi, I'm John Lochert. Team sports have been a big part of my life ever since I can remember, playing soccer and basketball in my backyard.

We started this site to share this passion and the knowledge that we have accumulated over the years but ultimately we wanted everyone to be able to share the enjoyment of being part of a team sport.

As an affiliate for Amazon, we will earn a commission from qualifying purchases. We are paid commissions for purchases made through links in our posts.